Xiamen Node Held the Awards Ceremony for the Outstanding Employees

Diligence, aggressiveness and devotion are excellent qualities and fine traditions of Chinese nation. The healthy and rapid development of Xiamen Node relies on the wisdom, effort and devotion of all the staff and fully reflects the sense of ownership and responsibility of them, achieving the mutual progress of both the staff and the company. To reward the outstanding employees and encourage others, Xiamen Node held the grand annual summary and awards ceremony on January 14th, 2017, issuing certificates to the "outstanding employee" and "advanced workers".

At the awards ceremony, president Zhang issued the certificate of "2016 annual outstanding employee" to Liang Wenhe and vice manager Xu of business department of science and technology read out the advanced deeds of Liang Wenhe. Vice-president and chairman of the labor union Mr. Wu issued the bonus and certificate of "2016 annual advanced worker" to the model workers chosen in each department. The company also issued the certificate of "loyal employee" and awarded the gold coin of "service star" to an old employee Zhang Feng who had been working for Xiamen Node for more than 10 years. All these awards were issued not only for rewarding the outstanding ones and setting up models for others, but also for encouraging all the staff to be in a new and higher working level.

After the awards ceremony, president Zhang delivered a significant speech, appealing all the staff to learn from Liang Wenhe who always put the need of our customers as the first consideration. This will accumulate good credit and reputation for the company and win the trust and cooperation of the customers. Liang Wenhe also has so strong will that he could persist no matter how the working environment was. All the staff should learn the good ideology and morality of Liang Wenhe and learn his working style like putting collective interests higher than the personal gains and losses and being willing to make painstaking effort to work. The staff should reflect on their own inadequacies and proceed with determination, fully showing their own value and capability in the year of 2017, making great contribution to the company and thus seeking benefits for their own. 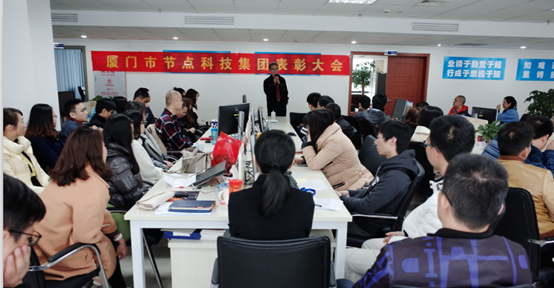 President Zhang was delivering a speech after the awards ceremony

The new year brings us new hope and the new journey carries new dream. In the new year, to further implement the development goal of Xiamen Node and finish all the work, all the staff, especially leaders at all levels and the technical backbones should do solid work with positive spiritual outlook and working enthusiasm. We must keep in mind the strategic purpose and assignment of the development of the company and push forward the practice of all work. All these will create a new situation for the development of Xiamen Node and drive it to diversified and scale operation.